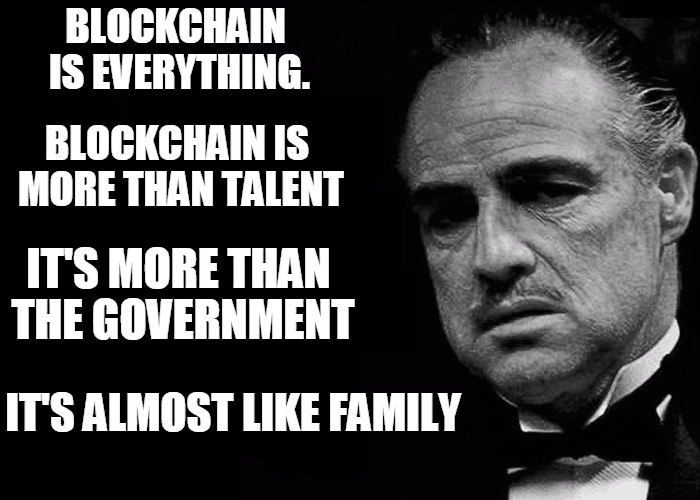 It has been almost a decade we saw Bitcoin emerging from the free market to challenge the status quo of central banking.

And it is almost five years that we have seen the word ‘Blockchain’ getting a lot of attention.

But have you paused and thought for a moment, why so much buzz?

Well, that’s because these two inventions are promising various solutions for the long-standing issues humanity has faced.

And many people around the world are leaving their jobs and joining these two revolutionary fields as they have come to realize their transformative powers.

Quite a few have also claimed that Bitcoin and Blockchain are going to be bigger than the invention of the internet itself.

Realizing that many thought-leaders and visionaries have spoken highly of Bitcoin/Blockchain and here are some of the best quotes that I liked about them:

You can simply jump to earn above 50% returns by joining our vetted Paid Crypto Signals Groups at a nominal monthly cost. Check it out here !!

#2. “Bitcoin is exciting because it shows how cheap it can be. Bitcoin is better than currency in that you don’t have to be physically in the same place and, of course, for large transactions, currency can get pretty inconvenient.” —Bill Gates, co-founder of Microsoft and philanthropist

#3. Bitcoin will do to banks what email did to the postal industry.” —Rick Falkvinge, Swedish information technology entrepreneur.

#5. Bitcoin is a remarkable cryptographic achievement and the ability to create something which is not duplicable in the digital world has enormous value… incredibly useful for many computer applications.-Dr. Eric Schmidt, Former Google CEO

#6. Bitcoin is the beginning of something great: a currency without a government, something necessary and imperative. But I am not familiar with the specific product to assert whether it is the best potential setup. And we need a long time to establish confidence. –Peter Thiel, Co-Founder of PayPal

#7. A lot of people automatically dismiss e-currency as a lost cause because of all the companies that failed since the 1990s. I hope it’s obvious it was only the centrally controlled nature of those systems that doomed them. I think this is the first time we’re trying a decentralized, non-trust-based system.-Satoshi Nakamoto, Founder of Bitcoin

#8. 03/Jan/2009 Chancellor on brink of the second bailout for banks –Satoshi Nakamoto, Founder of Bitcoin

#9. When I first heard about Bitcoin, I thought it was impossible. How can you have a purely digital currency? Can’t I just copy your hard drive and have your bitcoins? I didn’t understand how that could be done, and then I looked into it and it was brilliant.- Jeff Garzik,  a former contributor to Bitcoin Core, a Bitcoin developer

#10. PayPal had these goals of creating a new currency. We failed at that, and we just created a new payment system. I think Bitcoin has succeeded on the level of a new currency, but the payment system is somewhat lacking. It’s very hard to use, and that’s the big challenge on the Bitcoin side.” –Peter Thiel, Co-Founder of PayPal

#11. Cryptocurrency is such a powerful concept that it can almost overturn governments –Charles Lee, Creator of Litecoin

#12. Economists and journalists often get caught up in this question: Why does Bitcoin have value? And the answer is very easy. Because it is useful and scarce.-Erik Voorhees, CEO & Founder of ShapeShift

#13. Gold is a great way to preserve wealth, but it is hard to move around. You do need some kind of alternative and Bitcoin fits the bill. I’m not surprised to see that happening.-Jim Rickards Economist and Investment Banker

#14. Bitcoin is the most important invention in the history of the world since the Internet. –Roger Ver, Bitcoin angel investor, and evangelist

#16. Every informed person needs to know about Bitcoin because it might be one of the world’s most important developments.”- Leon Luow, Nobel Peace Prize nominee

#17. I do think Bitcoin is the first [encrypted money] that has the potential to do something like change the world.- Peter Thiel, Co-Founder of Paypal.

#18. Virgin Galactic is a bold entrepreneurial technology. It’s driving a revolution and Bitcoin is doing just the same when it comes to inventing a new currency.”-Sir Richard Branson, Founder Virgin Records, Virgin Galactic,

#19. “We have elected to put our money and faith in a mathematical framework that is free of politics and human error.” –Tyler Winklevoss, Co-creator of Facebook

#20. You could imagine something like a completely automated system for renting bikes that’s just done completely over blockchain crypto-payments. And theoretically just sort of start it up, and it works completely autonomously. —Vitalik Buterin, Creator Ethereum

#21. Before I went to prison, there were not really many blockchain products. It was only, bitcoin. -Charlie Shrem

#22. I think the whole narrative of blockchain without bitcoin will amount to very little. -Fred Ehrsam

But it has not all been rosy until now because you have several negative bitcoin and blockchain quotes from the non-believers. Here are some of these quotes:

#23. It’s a fraud” and “worse than tulip bulbs..-Jamie Dimon, Chairman, and CEO of JPMorgan Chase

#24. It looks and smells like all the bubbles I have seen throughout history –Jim Rogers, legendary Investor,

#25. So it seems to me it ought to be outlawed. It doesn’t serve any socially useful function. It’s a bubble that’s going to give a lot of people a lot of exciting times as it rides up and then goes down,” Stiglitz added. We should all just go back to what we always had and this is just a bubble –Joseph Stiglitz, Nobel Prize-winning economist.

#26. Stay away from it. It’s a mirage, basically. In terms of cryptocurrencies, generally, I can say almost with certainty that they will come to a bad ending.—Warren Buffet, CEO of Berkshire Hathaway

#27. Bitcoin is an attempt to replace fiat currency and evade regulation and government intervention. I don’t think that’s going to be a success, –Ben Benarke, former Chairman of the Federal Reserve

So these were some of the best crypto and blockchain quotes by some of the industry veterans that themselves are involved in building this ecosystem.

Of course, a pinch of negative thoughts is always welcomed to keep things in balance, and that’s why I have listed down those quotes as well.

But if you ask me about my stand on Bitcoin and Blockchain, I would say, “It will change everything we do and how we do in next decade or two.”

With that signing-off for today, meanwhile, I will wait for your comments below and request you to share this article with your friends & family !!