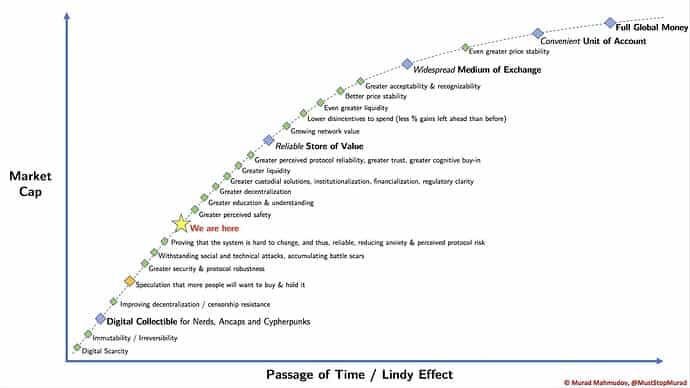 Well, no one knows but believe it or not, everyone is interested in Bitcoin’s price.

Some want it to die while some are bullish about its long-term prospects.

And if you ask me, where do I belong?

I would unhesitatingly be in the bullish realm because it is almost ten years. Bitcoin has been here, and by Lindy effect, it is believed to stay here for more… For those of you who don’t know Lindy effect here is a simplistic explanation of the same:

The Lindy effect is a concept that the future life expectancy of some non-perishable things like technology or an idea is proportional to their current age, so that every additional period of survival implies a longer remaining life expectancy.

And now that we know Bitcoin is here to stay, there have been many speculative Bitcoin predictions so far, and amongst them, Bitcoin price forecast is the foremost.

So let’s see some of the famous price predictions made by experts for Bitcoin- the king of cryptocurrencies !!

Let me start from some of the realistic ones, and then we will move towards some outrageous but still possible Bitcoin price predictions.

A global research and analytics company that analyses stock markets and crypto predicts Bitcoin to hit between $20,000 and $64,000 by the end of 2019.

Tom Lee- the co-founder of Fundstart and prominent Bitcoin investor, has also forecasted that Bitcoin can hit $91,000 by March 2020 based on MeltCafe’s law and the current dip.

Lee and Fundstrat have used an average of the percentage gained at price after each dip to arrive at the 2020’s number. A passionate Bitcoin believer on Twitter has come up with an unorthodox prediction of the 2020 bitcoin price would be $17,317.

His prediction is based on Bitcoin mining difficulty for which he happens to believe that there is a power law relationship between price and difficulty.

Now, I know some of you might think that how he got the difficulty figures for Bitcoin for 2020.

Well, that’s based on a surveyed assumption where 59% people believe that there will be a 10x increase in Bitcoin’s mining difficulty in 2 years and hence this price of $ 17,317 pops up. Trace Mayer- the early adopter and evangelist of Bitcoin, who started recommending Bitcoin at the price of $0.25.

He is an entrepreneur, monetary scientist, and a huge believer in monetary sovereignty. He has also formed a new way to value Bitcoin at any stage by using Mayer Multiple which is simply the 200-day moving average of Bitcoin price action.

And according to this Mayer Multiple, it looks like that Bitcoin will reach $21, 600 by December 2019.

Perhaps $BTC crypto-winter will last 6-9 months longer (hopefully!), touching $3k, but probabilities are getting less favorable of that possibility. He runs one the most widely watched financial news coverage thrice a week and has been quite open about bankers fraud and need of Bitcoin.

And he believes this pattern will repeat all the way to $100,000

This pattern will repeat all the way to Bitcoin $100,000 and beyond… pic.twitter.com/o9Wj4reBtv Tim Draper the famous America venture capitalist and founder of Draper University is also bullish on Bitcoin for the longer term.

He has also believed to by 30,000 BTCs from US Marshals auction in 2014 which were confiscated during the Silk Road market bust.

Winklevoss twins predicted earlier this year that Bitcoin is highly undervalued and reach 40 times its current then value.

It is also believed that Winklevoss twins holds around 100,000 bitcoins and have predicted the future value of $ 320,000 for Bitcoin which might make them first crypto Trillioners.

An independent crypto trader and analyst have come up with interesting Bitcoin price numbers.

He has released a chart of historic Bitcoin prices actions combined with the halving year after effects. This is an interesting one because I too have developed the same kind of valuation model for myself. John McAfee will be eating his dick if Bitcoin doesn’t reach $1 million per BTC by 2020.

Yeah, you heard it right, the same McAfee who is the founder of cybersecurity company-McAfee.

Which Is The Accurate Bitcoin Price Forecast Or Price Prediction For 2019-2020 & Beyond? Now, I know the most important question that would be going in your mind would be, which of these is the most accurate prediction?

These are predictions, which can be wrong also because this is a new asset class and we don’t understand its valuation models yet.

Most of the predictions for 2018 have failed so far and only a quite a few have been proven correct, so you need to take this thing also in the account before making up your mind for investment.

Lastly, these predictions are in no way an investment advise from TheMoneyMongers.

Now you tell us: What’s your prediction for Bitcoin in 2019 or beyond? Share the same with us in the comments section below with your reasoning, and we will be happy to include it in our list 🙂