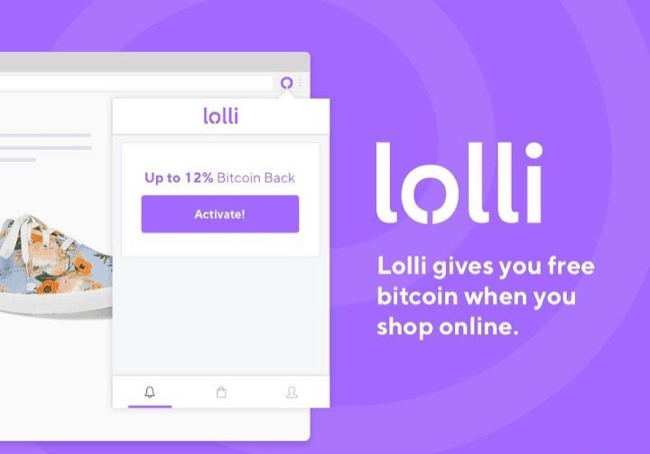 If your answer to the above questions is Yes (!), I have something special to share with you today.

The fact that you are reading this line tells me, you know about bitcoins but it might a daunting topic. Some of you would be even wanting to get started but don’t from where to start.

On the other hand, there might be some who know where to get started but are too skeptical about getting started.

But all this changes the very moment. But you might think, where shopping came in between of Bitcoin.

Wait I am coming to that.

Lolli is a shopping application that rewards you free bitcoins when you shop online through it.

When I first discovered Lolli a few months back, I was blown away by its simplicity. Moreover, credit to its ability to remove so many complexities towards Bitcoin’s adoption. (more on this later…)

Lolli takes something as easy as shopping and leverages that abstraction layer as a medium for a large group of people to earn Bitcoin. They partner with numerous online brands that pay Lolli an agreed percentage of commission when someone shops through Lolli.

Lolli then again shares a percentage of the commission they have received from their partners to give you cash back in the form of bitcoins.

We believe that bitcoin is the future, however, bitcoin in its current state is not easily accessible to all.

Our mission is to change this with Lolli, making it easy for everyone to earn, save, & share bitcoin. pic.twitter.com/exifMt5Ryw

Some people are skeptical of Bitcoin, and those who aren’t, don’t know where to get started because Bitcoin is so complex, to begin with.

On the other hand, Bitcoin mining and trading is not everyone’s cup of tea.

But there are two facts:

Lolli rides on these two understandings. That’s why they have come up with this incentive system based on Bitcoin. After all, the only way to train a large number of people is to incentivize them to do so.

Thus Lolli is incentivizing people by giving them free bitcoins when they shop online.

That’s it. Simple but powerful.

How To Get Started With Lolli? Get started with Lolli is dead simple given the minimalistic design they have for their app.

Now go to their partner stores through their website or browser extension, and you will be alerted about the percentage of savings in bitcoins you will make by shopping at that store.

After you have chosen to go through Lolli to one of the stores, your deal is activated, and you can continue shopping as you would typically do.

So, in a nutshell, to get started:

Note: Once you reach a minimum balance of $15 in bitcoin, you will be able to choose between transferring your Bitcoin to your address or cashing out to your linked bank account. But rewards become available after they have been confirmed. Reward confirmation occurs once the partner’s reward locking period has passed. This is typically 30-90 days, the return period, after your initial purchase or completed stay.

As of now, Lolli supports 500+ online stores where you will find everything you need from men’s, children’s and women’s clothing, accessories and shoes to home décor, electronics, toys, hotel bookings, flights and more.

So just shop and earn Bitcoin back up to 30%. Lolli for shoppers is build to make Bitcoin dead simple. For shoppers, it is like leveraging that they know very well to earn bitcoins, i.e., Shopping.

And shoppers here have dual benefits, which I think they overlook, i.e., they get Bitcoin cash backs for shopping and the cash back they get in Satoshis (the smallest unit of Bitcoin) can over time become much more valuable than they are today. Every online merchant is competing against Amazon.

What Lolli does for merchants, is that it leverages already existing mental space that Bitcoin has captured in the minds of an average joe.

This kind of user wants to get started with Bitcoin but maybe not starting because of the skepticism. But being able to earn little bitcoins, just by online shopping is bet he/she is willing to take and is comfortable with.

So suddenly the merchants who integrate Lolli gets access to this unique breed of customers who are Bitcoin aware and are willing to shop.

In any case, merchants needn’t adapt much because for them giving cash back in bitcoins can be akin to giving rewards or cashback points, which Lolli is already taking care on their behalf.

But merchants need to believe that customers will come to them through Lolli because they are offering Bitcoin while shopping which nobody else is offering.

That’s the UPS of Lolli which merchants can afford to miss.

Earn By Sharing & Earn By Shopping You might be thinking, how to do more with Lolli?

It is simple. Earn by shopping or earn by sharing.

I have already spoken a lot about shopping, but you can also earn bitcoins by sharing about Lolli to other people.

Whether you are an individual who has received Bitcoin cash back from Lolli or business who have been leveraging Lolli to access this unique set of shoppers, you can refer Lolli to your friends and other businesses to earn more in bitcoins.

As of now, if you share Lolli with friends, you can earn bitcoins worth $5 when they shop through your referral!

Note: For those, you don’t want Bitcoin cash backs can also withdraw their threshold cashback amount directly in their bank accounts.

Why The Name ‘Lolli’ & Where Can You Use It? In the words of its Co-founder, Alex Adelman, who says:

“When I was young, my dad would take my sister & me to the bank. I never liked going to the bank but always looked forward to the lollipop at the end. I believe Bitcoin is the bank of the future & all that’s missing is Lolli.”

That’s why the name Lolli. Which is a very cool and humanizing way of looking at Bitcoin.

You can use Lolli in the US as of now.

Needless to say that they are planning to integrate new merchants and drive user adoption so that you can earn even while having a coffee.

They have been testing and playing with Lightning Network too. (Umm, looks like you don’t know about Lightning yet, its Bitcoin’s future, do give this a read if you aren’t aware !!)

More work on making merchants aware of the benefits of directly accepting Bitcoin is also going on simultaneously. After all, it makes sense in doing so because then the merchants can incentivize more to the users by saving on transaction and chargeback fees.

My Parting Thoughts For Lolli: Most underrated company in cryptosphere !! Lolli, in my opinion, is the most underrated company right now in the cryptosphere. They have the power and background to take Bitcoin to the next 100 million people and unleash new possibilities by handing over Bitcoin to the average masses.

I say this because I have spent two years in this space and before that, I have spent some time studying economics.

Lolli understands its users and its product. Understanding this is hard !!

Lolli knows that not every type of user is comfortable dealing with Bitcoin private keys or wallets.

Not everyone is aware of Bitcoin economics, not everyone is listening to Bitcoin podcasts and is neither hooked to crypto twitter. These are hard working people having day jobs, they can’t do that, and many aren’t technically literate enough to handle Bitcoin, yet.

It is just too overwhelming for that average person.

But these average people do know about Bitcoin. They have heard of it. They want to try it.

For better or worse, Bitcoin’s price is the only thing that matters to them. They have seen their friends and relatives earning money from it. They too want to get on board in some capacity.

And Lolli is helping them !!

Lolli is conveying them; it’s not about putting your life’s saving in Bitcoin. It is about a slow transition to Bitcoin, like taking something which you are already doing and then earning through it, i.e., Shopping.

Like when you buy $100 worth of groceries through Lolli’s partner stores and get $15 worth of Bitcoin. The next time you check this Bitcoin, it is valued at $25, and that’s where it becomes a mental hook for the shoppers to get involved more.

Lastly, Lolli’s approach is novel and simple. It reminds me of my mentor’s words:

If we continue to take action in the same manner as we always have, we cannot achieve anything new. The initial steps we take can determine the results 10 or even 50 years hence. – Daisaku Ikeda, SGI President.

Tricks that have got us to this level of adoption, won’t get us to the next and Lolli seems to get it.

From an outsider’s point of view, at Lolli, I think they have already given a lot of serious thought on how to bring the next 100 million or a billion people in Bitcoin & Crypto?

And now they are executing it.