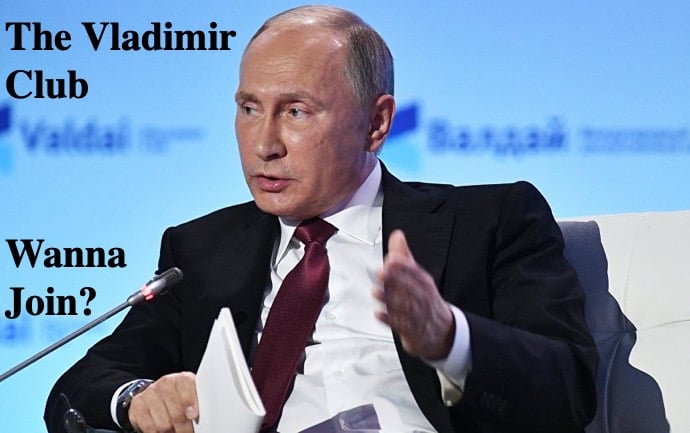 In your entire life, you must have come across different types of clubs such as college club, hobby club, sports club, writing club, etc.

Similarly, in the crypto realm too we have clubs based on the supply of coin one holds.

Out of these clubs, the most popular one is the Vladimir Club about which I want to talk to you today!!

So let’s jump in:

What Is Vladimir Club?

Vladimir club is a club, first conceived by a BitcoinTalk forum user in 2012 specifically for Bitcoin.

According to the criteria, anyone owing 1% of 1% of the total supply of Bitcoin will be a member of this club by default.

To translate it into conceivable numbers, let us see the example of Bitcoin:

Later the BitcoinTalk community members have also thought of other club names based on one’s Bitcoin holdings:

How To Become A Member Of Vladimir Club?

The criterion of the club is quite straightforward, and you can also become a member of this club by just acquiring 2100 BTCs, but it is not as simple as it looks.

I will tell you why it is so:

Extension Of Vladimir Club Concept For Other Cryptocurrencies

This concept of the club was picked up by the crypto community and extended to other cryptocurrencies by forming Vladimir clubs for those currencies.

Later this concept was even further indexed and standardized by OnChainFx (a dashboard for crypto metrics & rankings).

OnChainFx now lists Vladimir Club Cost for all the cryptocurrencies, so that you can plan to acquire other coins to become eligible for their respective Vladimir Club membership.

So, in short, this became a popular concept that basically tells you how much it costs to buy 1% of 1% of a particular crypto asset’s total supply.

Many have noticed our "Vladimir Club" metric. Check out its history here: https://t.co/QnuufFB7g9, & all our metrics: https://t.co/6rA8b6Q1G5

And note even back in 2012, at $10/BTC, people considered themselves "too late on the scene" to acquire enough BTC for the Vladimir Club. pic.twitter.com/Xi2sxE76eQ

How Many HODLers Are There In The Bitcoin Vladimir Club?

Of course, we cannot find out with certainty of how many members are there in the Bitcoin Vladimir Club, but we can approximate the numbers.

So if you look at the Bitcoin rich list, you will find 1720 Bitcoin addresses have a balance between 1000-10000 BTCs. More specifically as a BitcoinTalk forum member says, “712 addresses have 2000 or more bitcoins currently and 549 of these have 2100 or more.”

But if you look from another angle, this approximation falls apart because many users might be using several addresses and it can be a possibility that out of these 500-600 addresses many addresses are owned by a single person.

In that case, the number of actual members in Vladimir Club will become less than 500 but how much will it be?

Actually, no one will come to know unless the HODLers themselves disclose.

And in the Bitcoin realm, it is never wise to disclose your Bitcoin holdings because it can lead to other privacy, hacking, or Ransome issues

Disclosure: I am not a member of Bitcoin Vladimir Club and neither I wish to be because I think Bitcoin’s HODLer distribution should also remain sufficiently spread !!

So that’s all from our side in this introduction to Vladimir Club and if you liked this article, do share it with your friends & family members !!