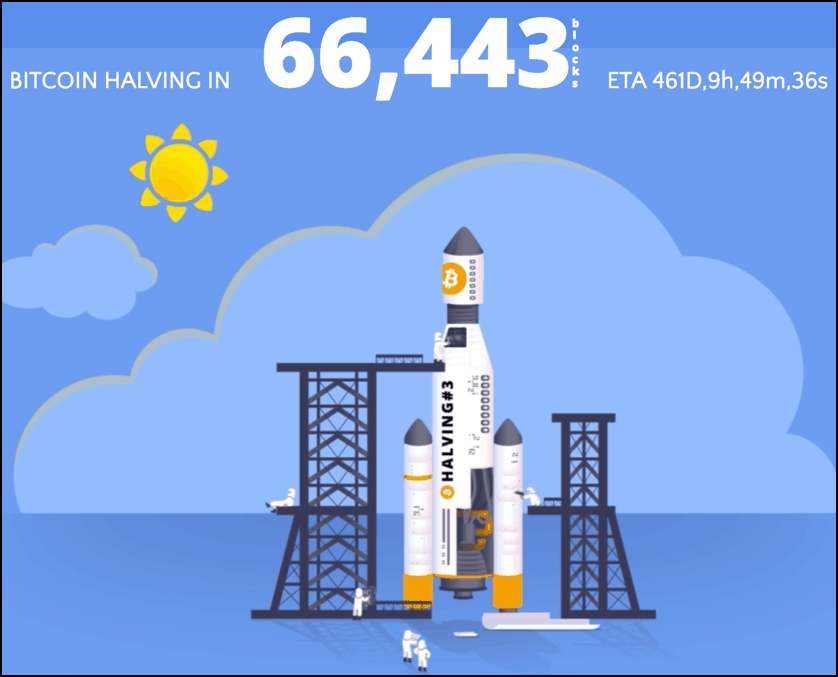 Experts predict that it might be the last chance to own a whole BTC.

This is because of twofold reasons, and they are:

These two facts are the ultimate reality in the Bitcoin realm; thus they play a very critical role in making us realize the eventual scarcity of Bitcoin assets.

However, the upcoming Bitcoin halving is less than 30 days away, and currently, Bitcoin is trading around $6000-8000 mark.

This price range is still affordable to the general masses, but after Bitcoin halving, you will see that people will only buy fractions of a BTC merely because they will not be able to afford a whole BTC.

Well, then you are in the right place because today in this article we are going to talk about Bitcoin halving, its dates, price predictions, and its impact at length.

So stick around with me till the end while I start with Bitcoin halving’s introduction:

Bitcoin Block Reward Halving Countdown Clock
Get one of the lowest fees and friction while buying Bitcoin directly via your credit or debit cards. Use CEX.io now and enjoy your first bitcoins now !!

What is Bitcoin Halving?

Before diving into Bitcoin halving, let’s first understand halving itself because halving is not something that is specific only to Bitcoin.

Halving is a common phenomenon that happens at regular intervals in proof of work cryptocurrencies, and in layman terms, it means that:

Halving is a 50% reduction in block reward after a certain number of blocks have been mined, and the block reward is the number of coins received in reward by a miner for successfully mining a correct block. See our guide on Bitcoin mining explained !!

Let’s take the example of Bitcoin:

In Bitcoin, a miner mines a successful block every 10 minutes and receives 12.5 BTC as a block reward. After the next halving of Bitcoin, this block reward will get reduced to 6.25 BTC, and this halving in Bitcoin happens after every 210,000 blocks have been mined on the Bitcoin’s blockchain.

A similar, thing happens with Litecoin too, where Litecoin miners mine a Litecoin block every 2.5 minutes and receive 25 LTC as a block reward.

But in the upcoming Litecoin halving, this block reward will get halved to 12.5 LTC, and this halving happens after every 840,000 blocks.

So this is Bitcoin halving.

Now I know that many of you would want to know when the next Bitcoin halving is? So that you can capitalize on this opportunity!!

And why not also when this is ultimately a game of demand and supply which is a clear indication that Bitcoin’s price might increase given the resultant decrease in the two of Bitcoin.

With these parameters you can predict the next subsequent halvings and be prepared for it:

Regarding price predictions, it is tough to say what will be the price of Bitcoin at a certain point in time, but some brave price prediction experts have dared to forecast Bitcoin’s worth after the upcoming halving in 2020.

He has released a chart of historical Bitcoin prices actions combined with the halving year after effects. This is an interesting one because I too have developed the same kind of valuation model for myself.

Get one of the lowest fees and friction while buying Bitcoin directly via your credit or debit cards. Use CEX.io now and enjoy your first bitcoins now !!

Also, Bitcoin’s halving history gives us a glimpse of how it may play out in the end because every time after the halving happens the Bitcoin price goes to the moon.

Of course, the price action is not very immediate to spot, but it reaches the all-time high in 10-12 months post the halving.

When Will The Last Bitcoin Mined?

So if you drill down mathematically and try to get projections for the ending of rewards in Bitcoin mining, you will get these figures suggesting that the last Bitcoin will be mined in the year 2140.

Of course, none of us will be alive at that time, but it marvels me, how Satoshi Nakamoto was able to program digital scarcity in Bitcoin by the use of proof of work and maths.

What Can be The Effect Of Bitcoin Split In 2020?

Bitcoin halving or also known as halvening of Bitcoin can have multiple effects not only on Bitcoin but on the global economy.

We all know that Satoshi Nakamoto made Bitcoin because he was frustrated by the workings of central bankers who always print money to stimulate the economy and eventually destroy the wealth of common people.

If the Bitcoin experiment survives for another 10 years, we would have seen by then 2 more halvings after the halving of 2020 and I believe by then most of the fiat will flow into Bitcoin and eventually monetizing Bitcoin to unprecedented levels.

#bitcoin could be MASSIVELY undervalued

Satoshi: BTC is like a "metal as scarce as gold + can be transported over a communications channel"

And this will ultimately either destroy central bankers or atleast keep a forceful check on them and their inflationary policies, eventually leading to a fairer world.

So that’s all from us in the introductory article on Bitcoin halving, and we hope this gives you a glimpse of a world where Bitcoin thrives.

If you liked this article, do share it with your friends who are still not aware of the Bitcoin miracle !!