Countries Where Cryptocurrency Is legal In 2020

Well, you are in the right place, but before that, I want to tell you something about the term ‘Cryptocurrency’ first.

The word ‘Cryptocurrency’ might be new to many, but its origins date back to the 1980s.

It was in the 80s that NSA referred to something as cryptocurrency, which is electronic money or digital money, as we say in more traditional terms.

But it wasn’t untill 2009 with the launch of Bitcoin that the word ‘Cryptocurrency’ became famous!

Now in 2019, almost everyone involved with the internet is aware of cryptocurrencies. Bitcoin, in the real sense, made the term popular in general masses by being the world’s first fully functional cryptocurrency.

But it has been a decade after 2009, and the world as a general hasn’t come to a consense regarding the legality of cryptocurrencies or digital assets.

In this guide, we are going to explore the legality of cryptocurrencies in general around the world, and we will go country by country.

Country specific is needed because the world is highly fragmented despite globalization. What is good in a particular country might not be so good in another.

In Which Countries Cryptocurrency Is legal? 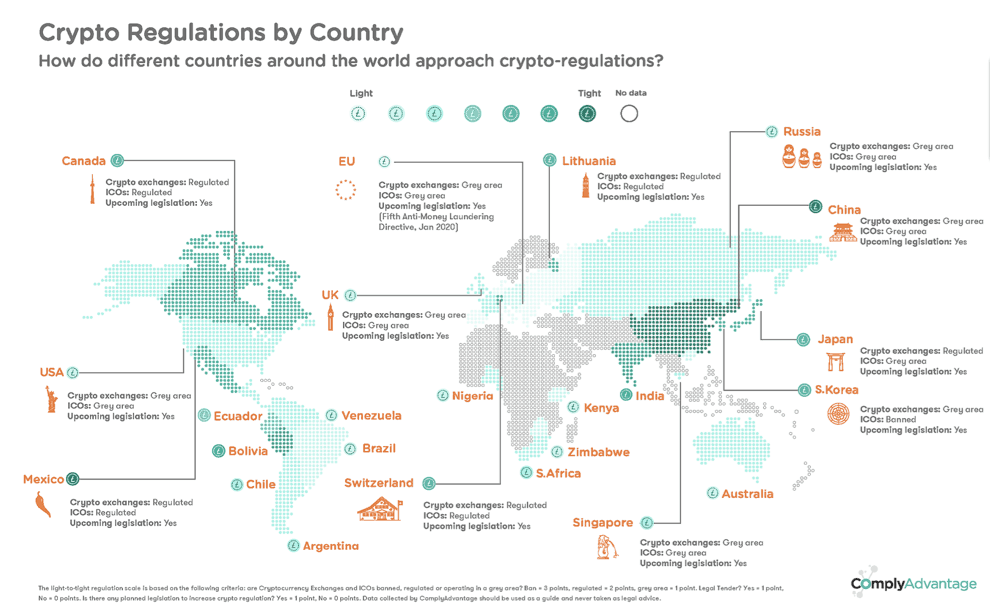 For starters, we are starting with a few countries for now, but there are certainly more countries look into the digital revolution happening right now.

Regulating and legalizing digital currencies or cryptocurrencies is a two-edged sword for governments around the world.

There are 3000+ cryptocurrencies, and most of them are run by nameless-faceless people with sufficient levels of decentralization.

Legalizing this plethora of cryptocurrencies would mean bringing an end to any capital controls these governments want to put on their respective economies.

On the other hand, governments lose their precious control over the sovereign currencies, and they would never want any competition against it.

But residents in some countries aren’t waiting for their government’s approval because cryptocurrencies are like life and death to them.

It is no longer a choice for these people.

Now you tell us: Which country do you reside in? What are the crypto regulations in your country? Is your country on the list? Tell us in the comments section below 🙂

Lastly, we shall be updating this list very soon because we recognize these aren’t t even a handful of countries, but there is only so much that we can also cover in a day. If there is a particular country you would like us to cover, shoot us in the comments below.