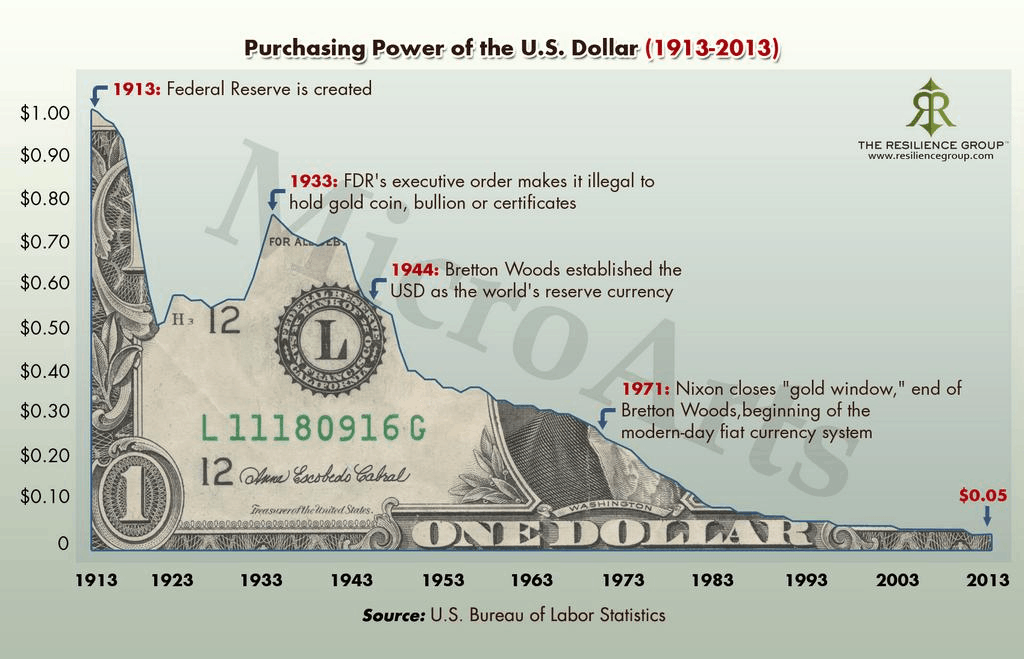 My life turned upside down 3 years ago when I learned about the difference between money and currency.

And I am sure yours too will.

I urge you to read this post in its entirety and take a moment to ponder upon it.

If you don’t yet understand the difference between money and currency, this could be the most life-transforming post you will ever read.

The difference of knowing and not knowing this could be so huge that it will determine whether you live a wealthy or a mediocre life.

Spoiler: Money and Currency are not synonymous and are not the same thing!!

So let’s get busy:

What is the Difference Between Currency and Money

Your true wealth is your time and the value you create in that time.

Money or currency (whatever you want to call it for now) are just a medium that stores that value you create.

I think we agree on this !!

Also, just like you, I have also wondered that the amount of goods my 10 US Dollar bill buys now is way less than what it used to buy me 10 years ago.

Does this sound familiar?

But still, people like you and me don’t take a pause and think about this.

Well, I also understand, why that pause moment never comes.

It is because we are all busy in our lives with our work and other responsibilities. And are constantly busy chasing the so-called money (USD, EUR, GBP etc).

And many of you will also argue or think that money and currency are one and the same.

To be able to understand the difference you will first need to understand some simple terminologies that are used for examining money or currency. And here are they:

The dollar or euro etc. bill in your pocket is a currency.

This paper bill or note has the following properties:

NOOOOOOOO!! I don’t think so. Governments or central banks or the paper currency issuing authority of your respective country can print as much paper currency as they want thus diluting the currency supply.

This dilution results in an increased supply of currency and its value or purchasing power decrease. (simple law of demand & supply)

Have you wondered why your dozen of eggs or a gallon of gasoline costs more than it used to cost 10-20 years back!!

In terms of economics, this is called inflation but that’s beyond the scope of this discussion now.

But this continuous currency supply secretly transfers the purchasing power of the dollars/euros in your pocket to the people who are actually printing, receiving and spending them first.

And who are these people?

They are the governments and the central bankers…

Note: These paper currencies are also called fiat currencies, which are enforced upon you due to government mandate.

But history shows that every paper currency has returned to its intrinsic value of absolute ZERO and there is 0% success rate of such paper currencies.

If you don’t believe me here is a snap of the US FED- Federal Reserve which accepts whatever I have said so far.

And moreover they have even published the intrinsic value of their paper denominated currency notes:

Whereas money is everything, what currency is, plus it is also a store of value.

So in short anything that is money should satisfy these properties:

And only two things fall in this category and they are Gold & Silver.

Gold & Silver from thousands of years have maintained these properties of money but until recently there is another new digital form of real money that has emerged.

It is called Bitcoin.

Bitcoin if put under the lens of properties of money, qualifies as money. (Of course, I know it is wildly volatile)

But anything that trades in a free market is supposed to be like that. All the 3 (Bitcoin, Gold, Silver) cannot be printed by governments.

And since they are limited in quantity they are bound to maintain their purchasing power by readjusting their prices time & again.

So by these standards, I think you have understood that anything that is claimed to be money must be a store of value and also maintain its purchasing power over long periods of time.

The difference in Money and Currency

But the irony is very few people understand this difference.

If you don’t believe me go out tomorrow and ask your engineer or a banker friend, they won’t be able to answer it…

I bet, dare ask your financial advisor and he/she will not be knowing the difference between the two- Money & Currency.

But one thing’s for sure:

Currency is simply a tool designed by governments to leach out the value that you create. The current form of currency is designed in such a way that it steals your wealth from you.

So paper currencies don’t store the value or purchasing power that you create every day instead they leak it back to the governments and banks.

And needless to say:

It buys less and less every year, so it is your currency that is losing its value.

I know you would wonder how this all happened?

Well, that’s a long story of history of money and currency which I will save for another time.

But what it all boils down to is:

And this brings us to the last section of this article.

What Should You Do?

This is a corruption of money itself.

Money in itself is not evil.

Gold and Silver time and again do an accounting of this access paper currency that is created around the world.

And while they account for this mismanagement or misallocation of wealth, every time in history, Gold and Silver prices rise.

But this time one more asset class that qualifies as money will too rise when such an accounting happens during a financial crisis. And this asset is Bitcoin.

If you look back in Bitcoin’s history, the very reason it was created was to liberate people from fiat paper currency.

And it will be a no-brainer to NOT hold some bitcoins in that case.

So I urge you to pause and understand the fact that the value you are creating in terms of paper currency like USD or EUR is under constant attack.

And if you don’t own some Bitcoin, Gold & Silver then you are doomed to fail.

So it all adds up to this:

“To really understand something is to be liberated from it. Dedicating oneself to a great cause, taking responsibility, and gaining self-knowledge is the essence of being human.” says the narrator of a famous documentary named ‘Four Horsemen.’

So if you have understood the myth of money and currency, then I think you will be liberated from it !!