Bitcoin is scaling, and it is scaling faster than your imagination just as described by this community member in his tweet:

The only thing I know is the fact of my own ignorance. Bitcoin, y’all are moving fast! New topics,

These are the fancy and highly technical-looking names of lightning technologies that are scaling Bitcoin on its second layer called Lightning Network.

Of course, there is a lot of criticism about how lightning is not ready but on the flip side Bitcoin’s lightning network is growing at the rate of Dog years.

It means development worth of many years is happening in just 6-12 months in lightning.

But still, one criticism that you often hear from critics is that it is cumbersome for users to open and close channels frequently. One cannot use coins that are off-chain, on the chain without closing the channel and vice-versa one cannot use on-chain coins directly into the off-chain channels.

Plus, there isn’t a way to replenish the payment channel once the funds are exhausted on either side, except that you need to open a new channel again.

In simpler terms, in normal lighting, bitcoins can only enter the network by forming a new channel and similarly can exit the network just only by closing the channel.

But how nice it would be to have something that makes it possible to alter the channel balance without making too many transactions associated with the respective closing or opening of the channels.

Splicing allows you to use off-chain and on-chain bitcoins seamlessly in the channels. With splicing, one can open channel, close channel, and send Bitcoin outputs on-chain in a single transaction.

Splicing-in means adding new/extra funds to the channel from your on-chain wallet without effectively opening a new channel.

Suppose you and a coffee shop where you often go has a payment channel. Now every time you fund that channel with a funding transaction, i.e., X bitcoins. But whenever that X amount is depleted, you need to again open a new channel with X amount from your side and 0 amount from shop owner’s side. This will require coordination, but with Splicing-in you can directly transfer extra funds to the old channel without effectively closing it.

Splicing-out means taking extra funds out of the channel and sending them on-chain without effectively closing it.

One classic example of splice-out is let say you want to pay a merchant who isn’t on the lightning network yet, but all your bitcoins are on the lightning. In this scenario, you can slipe-out and make an on-chain payment from the balance you have in your channel to the merchant without closing the channel itself. 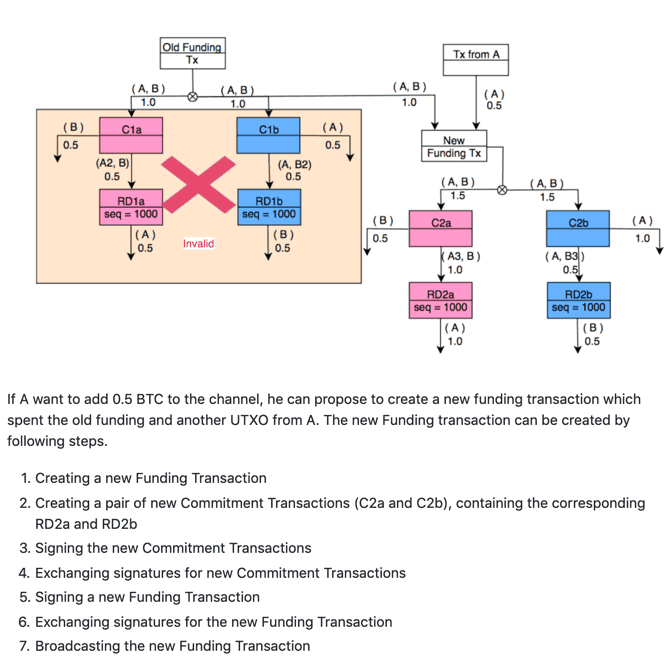 How this works under the hood is something to be understood. (For that, I would suggest you to first go through the Bitcoin UTXO article.)

So when splicing-in we are closing one channel and simultaneously opening a new channel with one on-chain transaction which is taking inputs from the old channel as well as new UTXOs from on-chain. So effectively the parties involved still have the channel with the old state but with increased funds.

Splicing-out works in a similar fashion with one on-chain transaction that closes the channel and also spends its funds in two UTXOs where one goes to a lightning channel that decreases the balance in the channel and the other lives on-chain.

The whole idea behind splicing is to reduce the number of on-chain transactions and leverage as much as the potential of the lightning layer.

Lightning Network’s splicing concept removes this barrier for the user’s mind that ‘my funds are locked in lightning’ because now you can send funds out of the channel and also into the channel without interrupting the normal operation of a channel.

And all this will be happening automatically through an automated multi-sig function on the backend which will simultaneously open and close channels in the same Bitcoin transaction.

Lastly, splicing is going to bring revolutionary changes into the way we have been doing BTC transactions and taking it to a new level.

That’s why lightning payments will be ultra-fast, cheap and private, opening up the way for unprecedented innovation that we haven’t witnessed untill now.

#BTC #Bitcoin + #LightningNetwork + Autopilot + Splicing will cause more earth shattering changes than have happened in the last 500 years.
The invention of the internet and industrial revolution combined are NOTHING compared to whats to come.

I hope you enjoyed this article on Bitcoin splicing and if you did? Do share it with your friends and family members who want to know about it !!

Next, I will be talking more about lightning technologies such as atomic multi-path payments, Bitcoin watchtowers, submarine swaps, etc. in the coming future.

Untill that time let’s keep learning about the Bitcoin revolution.