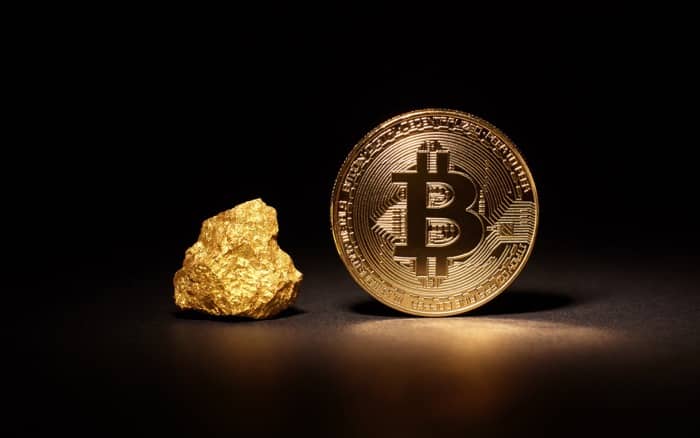 Want to know more about Bitcoin vs. Gold and which one to opt for??

Then you’re in the right place.

In this guide will teach you everything you need to know about Bitcoin and Gold. So that you can decide for yourself what’s best for you!!

Bitcoin and Gold both are real money!!

And I hope you know the difference between money & currency? It’s a no-brainer not to know this!!

Anyways, here are the things you’ll learn in this post:

Just a decade back in 2009 a mysterious person known as Satoshi Nakamoto released Bitcoin’s whitepaper.

Little did he know that he will change the world forever.

Bitcoin-a digital peer to peer cash system is a cryptocurrency launched in 2009.

It purely exists on the internet and has no physical presence like gold.

Bitcoin is uncensorable and extremely limited in supply. So-much limited that there will never be more than 21 million bitcoins ever.

To put it in another term:

Bitcoin is an internet protocol for value transfer that has been made possible through cryptography- branch of computer science and maths.

So as long as you have internet connectivity, you can receive/send any amount of bitcoins to anyone anywhere in the world, and there is nobody to stop you.

Bitcoin unlike the fiat money of the world (for example USD, EUR, GBP) cannot be just printed. Thus its debasement isn’t feasible and neither profitable for anyone trying to do so.

Satoshi Nakamoto knew the nature of the corrupt banking system and thus created an alternative to the traditional banking system.

He even left his message for the world in the first Bitcoin’s block that he mined. But have you wondered why people started comparing Bitcoin & Gold?

Well, that because of their properties.

So stick around; we’ll talk about them later in this article but for now, let us see Gold.

Gold is one of the scarce metals available on earth, and it is formed due to supernova effect billions of years ago!!

More definitely it a yellow precious metal with the chemical element of atomic number 79. This yellow metal is also mostly used in jewellery, decoration and was used to guarantee the value of currencies like USD, EUR, etc.

Beyond that Gold is limited in supply, divisible, and counterfeit-resistant which makes it more valuable.

I know deep down you also know this:

And that’s where I think it should hit you that Bitcoin is more or less similar!! Isn’t it?

Bitcoin vs. Gold: Bitcoin An Alternative To Gold

Let me show you how:

Bitcoin and Gold have a lot of similarities, some of these are:

Because of these similarities, only Bitcoin has been referred to as Digital Gold.

Now that you have looked into similarities it is logical to look into some of the differences also between Bitcoin and Gold.

Do you know which angle it is?

But apart from these differences/similarities there some more angles through which you should look at Bitcoin vs. Gold comparison.

Bonus: Learn about my take on it !!

One of the angles is of, INVESTMENTS !!

Can I be honest with you?

I believe Bitcoin is superior to Gold in this respect because of several reasons. And some of those reasons I am going to reveal with you today:

When I use the word ‘rarer,’ you should think, why is it so?

Well, see these stats to put things into perspective because I think just owning 1 BTC can bring you into the world top 1% Bitcoin holders.

The US has 11 million millionaires. Only ~300k people own at least 1 Bitcoin. Chinese demand isn't going away, but even if it was, so what?

300k is roughly the number of addresses with >1 BTC; so it's upper bound. Real # definitely lower.

Moreover, it is hardcoded in the BTC protocol that there will never be more than 21 million bitcoins in existence.

In my opinion too, in an economic meltdown like 2008 or 2000, Bitcoin’s value should skyrocket.

Let me explain why?

Well, it is likely to happen because it is limited in supply and thus deflationary in nature. Also, the government cannot just print new bitcoins so it is highly likely that a humongous wealth transfer might happen in Bitcoin’s market cap in a situation of uncertainty.

Also, a lot of many millennials around the world are now on the internet, ever than before and their natural inclination is towards digital hard assets like Bitcoin.

Further, it also evident from this random poll by Thomas Lee that Bitcoin will perform well in a recession like situation.

CRYPTO POLL (2 of 6 questions):
Do you think Crypto prices rise in a recession?

Bitcoin’s ROI is just staggering, and Gold with its 10% average annual increase comes nowhere close to Bitcoin. Here are some of the ROI stats for BTC:

Gold supply can be inflated as miners keep finding more avenues for mining Gold on earth and in the deep sea. Apart from that asteroid mining, i.e., mining of near-earth space objects will produce more gold in coming decades inflating away the price of gold.

Bitcoin transactions in terms of value transfer and in terms of portfolio allocation are on the rise. Check out these stats for more insights:

Bitcoin has been clearing more tx volume than global gold markets since early 2017.

These stats show that BTC transactional value is dwarfing Gold by a big margin and anyone who is ignoring this would regret in coming times.

Here’s The Next Step…

Now I want to turn it over to you for one question:

Let say you have USD 10,000 at your disposal and you have read this post!!

What would you do?

Well, if I were you, I will certainly not overlook Bitcoin because Bitcoin money-an alternative to gold is the hardest form of money humanity has seen so far.

Now, I think investing in gold or Bitcoin should no longer be an eluding question in your mind!!

Because by data Bitcoin is a vastly better investment than Gold at this point in time.

But here’s the secret and a confession too:

By any means, I am not writing-off Gold, if anyone does? Then do not heed to them.

Gold has been the hard money since the time without beginning, and that’s why if you are someone who’s quite skeptical about Bitcoin, should invest in gold.

But if you have some appetite for risk, then you should diversify some capital in Bitcoin first and then in Gold

So that’s all from us in this definitive guide.

We hope this is useful and if it is, do share it with your friends & family !!