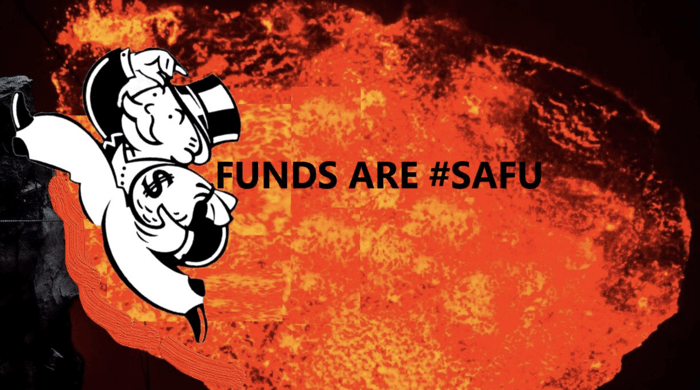 In my early days of Bitcoin and cryptocurrencies, I used to feel left out because I knew nothing about these terminologies.

And when I joined a few crypto groups and trading channels on Telegram and WhatsApp, it became even more confusing to hear terminologies that I haven’t heard before.

And I think you will agree with me when I say:

You have also often experienced this in Reddit, BitcoinTalk, or Telegram communities where you must have seen people misspelling terms like HOLD to HODL despite having an auto-correct feature in their phones?

But why is this so?

Well, the crypto community proud itself in bringing new terms and lingo in the cryptosphere, and it is much influenced by Wall Street stock traders.

So let’s today see some of the popular crypto-slangs that you might hear now and then.

So let’s dive in:

Keep your funds SAFU: Stop using exchanges to store your cryptocurrencies for the long term instead buy hardware wallets like Ledger Nano X or Trezor Model T to keep your crypto coins safe.

Safu is a term used to denote ‘Safe’ in the cryptosphere.

The very first time someone used this term (Safu) was by Bizonnaci YouTube channel, where the YouTuber made this funny video after the Binance CEO tweeted in July 2018 saying ‘Funds are safe.’ 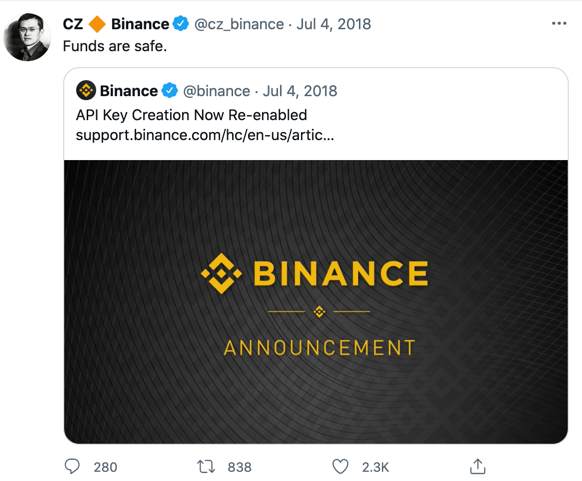 But this somehow got turned into a crypto meme and crypto slang.

Further digging-up also shows that Binance has also created a fund called ‘SAFU’ to protect the Binance exchange users. And here is what Binance says about it:

To protect the future interests of all users, Binance will create a Secure Asset Fund for Users (SAFU). Starting from 2018/07/14, we will allocate 10% of all trading fees received into SAFU to offer protection to our users and their funds in extreme cases. This fund will be stored in a separate cold wallet.

So since then, the crypto community has started using the term ‘Safu’ to denote or ask whether their funds are safe now on a crypto exchange in an emergency. Like for example, is Binance Safu?

Some people consider it that ‘Safu’ is a typo for the word ‘Safe’ but it doesn’t look like, and the same is again re-iterated from Urban Dictionary meaning: 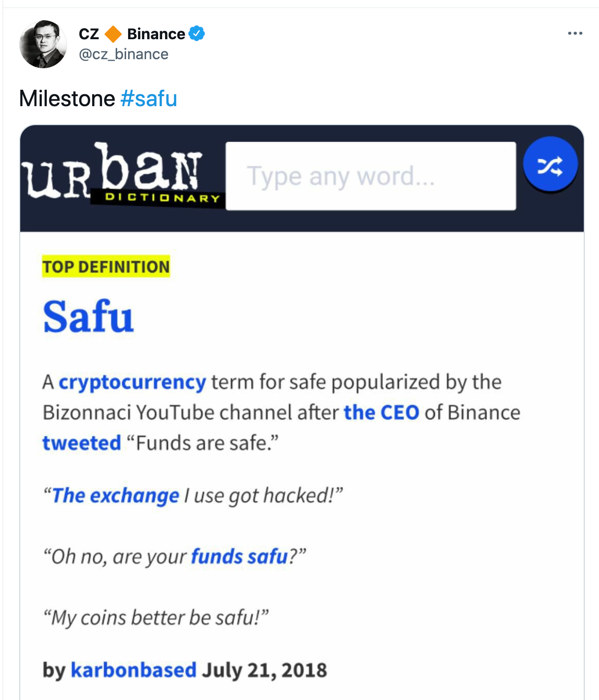 Let’s move on to the next most famous term in crypto-slangs.

If it’s not then I might be surprised but anyways for those of you who don’t know what HODL is? Here is the explanation:

HODL is a very popular backronym in the cryptosphere that became popular because of someone’s typo for the word ‘HOLD’ and here is the backstory of it:

First, the world HOLD appeared on BitcoinTalk Form in December 2013 when a drunk Bitcoin Talk user wrote the following post:

As it is evident that he was drunk, but he deliberately misspelled the HOLD spelling, I think to get attention and which he eventually got.

It looks like he was heavily down on Bitcoin but yet decided to stick and HODL his Bitcoin possession in his hardware wallet.

Since then this so-called misspelled term has got a lot of traction, and now every crypto traders use this term with a coin to signal that they are bullish on that particular coin and its price will be a lot higher in the future, if not today !! Wiki defines: Fear of missing out, or FOMO, is “a pervasive apprehension that others might be having rewarding experiences from which one is absent”.

Similarly, in crypto the feeling amongst investors that hey will miss huge profits if they don’t buy a particular coin or cryptocurrency.

Joy Of Missing Out or JOMO is the opposite of FOMO where one is very joyful that he/she missed on a particular opportunity because that was a #rekt trade. A misspelled word for wrecked which means that a trader is destroyed and is in heavy losses by being in a particular trade. This term has been borrowed from stock traders.

FUD means Fear, Uncertainty, Doubt created by false statements or distortion of facts to fall the prices deliberately so that they can buy that stuff in cheap.

For example, JP Morgan has created FUD around Bitcoin to buy it cheap for themselves. To The Moon, slang is used to signal that a particular coin will rise astronomically in its price and When Moon is generally used to inquire about when a specific coin is expected to increase in price.

ATH means All-Time High and is used to denote the highest price a particular coin has ever reached in its history. Like for example, Bitcoin reached its ATH of $20,600 in December 2017.

#7. Whale = Trader with a lot of coins, like Bitcoin Whale.

#8. BearWhale = A whale trader that is bearish

#9. Bagholder =trader left with a lot of coins to sell and is now holding the bag because prices are meager.

#14. ALTCOIN = Any cryptocurrency other than bitcoin.

#15. ASHDRAKED = A situation where you lost all your money.

#16. BTFD = Buy The Fucking Dip (an indication to buy a coin when it has dumped so hard)

#22. SHITCOIN = A coin with no potential value or use

Keep your funds SAFU: Stop using exchanges to store your cryptocurrencies for the long term instead buy hardware wallets like Ledger Nano X or Trezor Model T to keep your crypto coins safe.

Fun Fact: I have collected these terms and jargon from the internet, and they are not to be taken seriously. Also, their exact meaning might differ in some local communities and hence are subjective.

Now you tell us: Do you know any more interesting crypto slangs or jargon that I have missed here. Do let us know in the comments section below.

Do forget to share this post with your friends and family who are getting started in crypto !!